Multiple Myeloma Treatment: Too Many Choices? 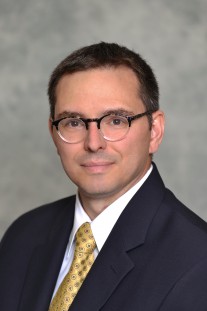 Real World Health Care continues our multiple myeloma series with an interview with Edward A. Faber Jr., DO, MS, associate director of the Blood and Marrow Transplant Program managed by Oncology Hematology Care, Inc. in conjunction with the Mercy Health and The Jewish Hospital in Cincinnati. He also serves as principal investigator for OHC’s multiple myeloma clinical trials. Dr. Faber is a member of OHC’s board of directors and the Dayton Clinical Oncology Program and serves on the board of trustees for the Leukemia and Lymphoma Society. We discussed his clinical trial work and his views on promising new treatments for multiple myeloma.

Real World Health Care: What attracted you to the field of multiple myeloma and what keeps you inspired?

Edward Faber: I initially sought a career in bone marrow transplantation. During my training and fellowship, I decided to pursue a career in academic medicine, at a time when multiple myeloma was almost in its infancy. There have been so many advances over the past decade, not only with new individual medications but also with new combination therapies.

The inspiration comes from the patients, as quality of life and survival have improved over the past 10-15 years. This is a testament to the collaborative effort between academia, cooperative groups and pharmaceutical companies.

RWHC: What is the significance of your recent clinical trials?

EF: Over the past five to six years, we have been involved with clinical trials involving carfilzomib, pomalidomide, panobinostat, and daratumumab. We’re also comparing combination therapies between carfilzomib (KRd) versus bortezomib (RVd). These trials have demonstrated the efficacy of the combination of carfilzomib and panobinostat. For example, daratumumab, a potent choice for our patients with multiple myeloma, may offer benefits towards patients with smoldering myeloma.

Bone marrow transplant is an accepted treatment option, and the large Eastern Cooperative Oncology Group (ECOG) trial comparing KRd and RVd with lenalidomide maintenance may prove to offer a viable strategy outside of transplant. Quite simply, the research that we have been participating in has led to improvements in combination therapies with the newer medications for patients in the current community.

RWHC: What are some of the biggest challenges facing multiple myeloma researchers?

EF: The challenges facing multiple myeloma researchers are not unlike those facing all researchers, from the standpoint of availability of clinical trials, and making clinical trials available to large portions of the population.

Staying up-to-date with the current large cooperative groups, as well as the national scientific groups such as the American Society of Hematology and American Society of Clinical Oncology, is more important than ever, in order to learn and understand which available therapies offer more promise and move those therapies forward so that they eventually can lead to FDA indications.

RWHC: How are clinicians overcoming treatment challenges in multiple myeloma?

EF: The availability of a large number of drugs to treat multiple myeloma patients is both positive and a challenge for clinicians because there can be just too many choices.

The most important step begins at initial diagnosis and knowing how to sequence available therapies — especially combination therapies — over time to maximize benefit. These combinations must be interpreted in the context of the patient’s other medical issues. Certain side effects, such as cardiac toxicities, need to be avoided in certain patients. Patients should be encouraged to develop a good relationship with a physician who has focused interest in multiple myeloma. If that physician is aligned with a large academic center, he or she will be in a better position to help translate recent research and trial successes to hospital exam rooms, where the majority of myeloma patients are treated.