Dr. R. Scott Turner on Resveratrol and the Amyloid Hypothesis 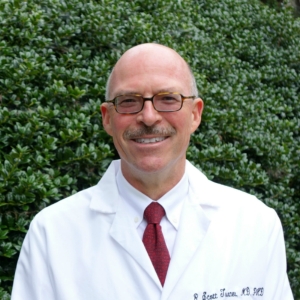 This week, we sit down with R. Scott Turner, MD, PhD, Professor of Neurology at Georgetown University and Director of Georgetown’s Memory Disorders Program. Dr. Turner specializes in cognitive behavioral neurology, memory disorders, Alzheimer’s disease and Neurodegenerative dementias. Here, he discusses his latest research as well as the roles of resveratrol and anti-amyloid treatments in AD treatments.

Real World Health Care: Why is it so important in Alzheimer’s disease treatment to find treatments that penetrate the blood-brain barrier?

Raymond Turner: Alzheimer’s disease affects the brain, and only the brain. In order for a drug treatment to be effective, the drug must penetrate the blood-brain barrier to get into the brain. For example, a drug given orally will be absorbed into the blood, and a fraction of that drug will then penetrate the brain.

RWHC: Can you provide a brief overview of your current and near future research aimed at improving AD treatment options? What research program(s) are you most excited about?

RT: The leading treatment approaches in progress are focused on blocking amyloid production from amyloid precursor protein (APP). These are BACE-1 inhibitors given by mouth daily. Or, promoting amyloid clearance (anti-amyloid monoclonal antibodies given intravenously once a month). A small fraction of antibody gets into the brain to promote clearance.

A major new development in AD research has been the discovery of biomarkers, including amyloid PET and tau PET scans of the brain. With these new scans, we can see and quantitate AD pathologies before death instead of the classical approach of examining brain tissue under the microscope after death. This had led to treatment studies of earlier stages of AD called mild cognitive impairment (MCI) and prodromal AD. Treatment earlier in the disease process maybe more successful, and thus we are now moving towards AD prevention studies as well.

RWHC: Why study resveratrol in relation to AD?

RT: Major risk factors for AD include diabetes, midlife obesity, and metabolic syndrome. In contrast, caloric restriction (consuming two-thirds of normal daily calories) prevents all disease of aging in laboratory animals, including AD. It is not clear if this also applies to humans, but diabetes is known to accelerate aging in man.

How does calorie restriction prevent AD? We propose a link between energy metabolism and amyloid precursor protein (APP) metabolism, which is the normal turnover and breakdown of APP to amyloid. This link may be mediated by a group of proteins/enzymes/genes called sirtuins that link energy balance to gene expression. Resveratrol and other polyphenols directly activate sirtuins to mimic the effects of calorie restriction. While resveratrol may not be the optimal molecule due to its rapid metabolism and poor brain penetration, the effects of resveratrol in our trial point to a new pathway that may be exploited to develop more potent and patentable molecules (drugs) designed to prevent and treat AD.

RWHC: What, if anything, can be done to accelerate AD research?

RT: Given the financial cost of AD to society, AD is the most underfunded disease in the NIH portfolio. We desperately need more research funding to support parallel development of more preclinical and clinical research strategies. We also need more research volunteers. Currently, less than one percent of AD patients participates in research, partly because many are never diagnosed (dementia is not a diagnosis), and because many aren’t aware of research opportunities. We also need more diverse participation in research. While our current study population is mostly Caucasian, AD affects the African-Americans and Hispanic population even more than Caucasians.

With greater funding and more research participation, we will develop safe and more effective strategies to prevent and treat AD. It’s just a question of when.

RWHC: What is your position on treatments designed to target beta amyloid protein? There seems to be some debate within the research community.

RT: So far, we have not developed a new treatment for AD based on the amyloid hypothesis: that progressive amyloid deposition in the brain causes AD. While amyloid basically defines AD, many other important pathological processes are triggered by amyloid — inflammation, tau/tangle formation, neuronal loss, synapse loss and neurotransmitter loss. We think that anti-amyloid strategies now in the pipeline will be proven safe and effective for patients with AD. However, we will likely end up with a cocktail approach, similar to the management of diabetes, hypertension and HIV. This cocktail will likely include an anti-amyloid and an anti-tangle strategy.

RWHC: Why did you get into the field of AD research?

RT: As I was completing my neurology residency, transgenic mouse models of AD were just developed and published. This presented a great new opportunity to discover new treatments in mice, and then translate these new treatments to the clinic with clinical trials. It turns out that the mice are easy to treat; we have over a thousand ways to cure AD in mice. But translation has not been so easy. We have not had a new FDA-approved drug for AD since 2003, but remain hopeful that strategies in the pipeline will be successful. All our research studies are add-on to the already available drug treatments for individuals with AD.