In August, the Centers for Disease Control and Prevention (CDC) issued a sobering report: Only one in three people with health insurance receive timely treatment for their hepatitis C. The figure is even lower for people covered by Medicare: nearly three in four (72 percent) are not treated.

What happens when hepatitis C is not treated? It can cause advanced liver disease, liver cancer and death. In 2019, the disease contributed to the deaths of more than 14,200 people in the United States, with higher rates of death among Black and Hispanic people than White people.

Hepatitis C is Curable and Financial Help is Available

Hepatitis C is curable in more than 95 percent of cases. The CDC estimates that more than 260,000 people should be treated every year to eliminate the disease as a national public health threat. 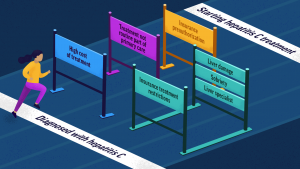 According to the CDC, people who test positive for hepatitis C should be treated with direct-acting antiviral (DAA) medication to prevent liver damage and further spread. Yet few people receive treatment within one year of diagnosis. Even though DAA medications have been available since 2014, the number of people treated with them declined between 2015 and 2020. Part of the problem is the cost of treatment, which initially carried a price tag of about $90,000 per patient.

“While the price has come down considerably since hepatitis C treatments were first introduced, their continued high cost remains a barrier for many,” said Krista Zodet, president of the HealthWell Foundation, an independent non-profit that provides a financial lifeline for inadequately insured Americans.

To help people living with hepatitis C access treatments they otherwise would not be able to afford, in 2015 HealthWell launched its  Hepatitis C Fund to provide copayment or insurance premium assistance. Through the fund, HealthWell offers grants of up to $30,000 to eligible patients who are insured and have annual household incomes up to 500 percent of the federal poverty level.

“I am grateful to HealthWell for the incredible grant they provided, and the lifesaving work they do,” said Robert S., from Seattle. “My doctor mentioned in a recent lab update that the medication was working, and my viral count was quite low. It is wonderful to be cured from a chronic condition.”

Later this week, hepatitis C will be in the spotlight at The Liver Meeting, sponsored by the American Association for the Study of Liver Diseases (AASLD). The Liver Meeting brings together clinicians, associates and scientists from around the world to exchange information on the latest research, discuss new developments in liver treatment and transplantation, and network with leading experts in the field of hepatology.

HealthWell will be exhibiting (booth 235) during the meeting to share information about its Hepatitis C Fund with patients, patient advocates and health care providers.

“We invite everyone attending the meeting to take a few moments and stop by our exhibit booth to meet members of the HealthWell team and learn about our programs and services for patients living with Hepatitis C,” said Zodet. “It is a perfect opportunity to learn about our valued resource for patients who would otherwise forgo critical, potentially lifesaving Hepatitis C treatment simply because they can’t afford it.”

To further spread the word about its hepatitis C fund, HealthWell is conducting a public relations and advertising campaign that includes ads in Cancer Health, HepC.com and POZ, a media outlet dedicated to serving people living with and affected by HIV/AIDS, a common co-infection in those with hepatitis C. A series of digital ads will also appear in metro stations and other areas surrounding the Liver Meeting’s Washington, D.C., location as well.

“We are proud of our efforts in raising awareness of this devastating, potentially deadly virus,” Zodet said. “Assisting those infected is, and will continue to be, a priority for the Foundation.”