Answers, Acceptance and Advocacy: Growing Up with Tourette Syndrome

The symptoms started in pre-school: vocal tics including throat clearing to barking like a dog, anxiety, and difficulties with fine and gross motor skills and mental processing. Young Adam Fishbein quickly became confused and frustrated—for years, school would be “a nightmare”—and his parents became increasingly alarmed. What was happening to their bright little boy?

The search for answers would start Adam and his parents on a life-long journey of advocacy—for himself and for others with Tourette Syndrome. 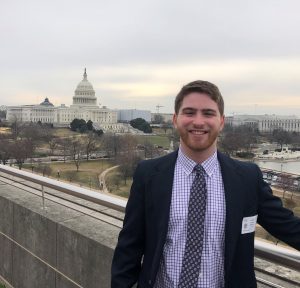 “My parents were relentless and took me to about a dozen doctors and specialists over three or four years to find out what was wrong,” said Adam, now a 21-year-old graduate student majoring in public administration at American University. “I was misdiagnosed with an alphabet soup’s worth of disorders before we found a developmental pediatrician who correctly diagnosed me with Tourette and ADHD.”

Tourette Syndrome is a neurodevelopmental movement disorder that becomes evident in early childhood or adolescence. It is part of the spectrum of Tic Disorders and is characterized by motor and vocal tics. According to the Tourette Association of America, Tourette and other Tic Disorders are not rare. An estimated 1 out of every 160 children between the ages of 5-17 in the United States has Tourette.

It is common for people with Tourette to be affected by another co-occurring condition, most typically, Attention Deficit Hyperactivity Disorder (ADHD) and Obsessive-Compulsive Disorder (OCD). There is no cure for Tourette, although various treatment options are available.

Fighting ‘Tooth and Nail’ for Acceptance of Tourette

According to Adam, while the diagnosis gave him and his family some peace of mind—they finally knew what they were dealing with—it didn’t end his challenges, especially in school, which became “even more of a nightmare.” His behavioral issues were disruptive to other students, and he often needed to remove himself from the classroom.

His differences resulted in being mis-judged and even bullied by classmates and teachers alike. His older brother, younger sister and parents also felt the sting of isolation that comes from having a child or sibling with disabilities.

“The public school I attended didn’t know how to deal with people who had challenges like mine,” he recalled. “My parents had to fight tooth and nail to get the district to meet their obligations in terms of responding adequately to my needs.”

Adam joined the fight by working with the Pennsylvania Tourette Syndrome Alliance (PATSA) to organize a series of assemblies at his school to educate other students and teachers about his Tourette and how it affected him. After those assemblies, he said his classmates were more understanding. The teachers and adults, however, were not as accepting.

“I guess children are more innocent,” he said. “They haven’t had the time and experiences yet to build in biases against those who are different.”

The Turning Point: Advocating for Tourette

Adam continued to struggle with life at his public school until fourth grade, when his parents succeeded in forcing the school district to pay for his Free and Appropriate Public Education (FAPE), a requirement of the Individuals with Disabilities Education Act (IDEA), allowing him to transfer to a small private school for students with complex learning challenges. After he began experiencing Repeated Anger Generated Episodes (RAGEs) in adolescence, Adam transferred to a therapeutic boarding school designed for kids with learning, behavioral and other disabilities like Tourette.

“As much as I didn’t want to leave home, I knew that if I didn’t, I might end up on the streets or in jail due to my Tourette RAGEs, which I couldn’t control,” he said. “During my time at boarding school, and with the help of my parents afterwards, I learned how to advocate for myself and overcome my challenges by using coping mechanisms and building a strong support system.”

Adam thrived in his new boarding school environment, where he remained for three years. Upon his return home and to a new prep school for children who learn differently in 11th grade, he became active in PATSA, the organization that helped him earlier in his life by providing guidance and materials for his elementary school assemblies. As a teen, Adam would take his involvement up a notch, becoming a junior youth mentor and then a youth mentor. He became the organization’s first youth board representative and eventually board vice president.

Adam also joined the Tourette Association of America’s Youth Ambassador program, through which he visited local schools, synagogues and community groups, delivering presentations about Tourette, much like he did in elementary school.

“The best part about being involved in PATSA and the Tourette Association’s Youth Ambassador program was meeting other kids and families dealing with Tourette and how accepting everyone was,” Adam said. “Everyone was completely comfortable to tic however they needed to without judgement. Unless you’re living with Tourette, it’s hard to truly empathize. These were ‘my people’.”

Living with Tourette as a Young Adult

Adam ended up excelling in high school and beyond, graduating with a bachelor’s degree in Interdisciplinary Studies: Communications, Law, Economics and Government (CLEG) from American University, where he is currently completing his graduate studies in public administration.

His personal life as an advocate for himself and others with Tourette spurred him to pursue internships and professional opportunities in disability policy. As an undergraduate student, and post-graduation, Adam joined RespectAbility’s National Leadership Fellowship, where he helped to cultivate a disability community resource guide for Long Beach, California, and developed a volunteer recruitment program, among other projects. He now works part-time at the National Committee for Responsive Philanthropy, which advocates to move more philanthropic resources to marginalized communities.

Thanks to a medication regimen he will be on for the rest of his life, he said many of his symptoms are now manageable.

“I’m fortunate to have an amazing roommate who isn’t really bothered by my tics—or if he is bothered, he just goes to another room,” he said. “I do still struggle with ADHD. I need to take breaks when sitting in a class for an hour or more or attending meetings that I’m not actively engaged in. But I don’t consider those challenges as a barrier to my education or professional career.”

Adam said he looks forward to launching a full-time career in public administration upon graduation, and to eventually finding a life partner to marry—someone, he said, who will be able to live with his tics and ADHD.

“At this point, my goal is to be happy and comfortable in my personal life while making a difference and effecting positive change in my professional life,” he concluded.