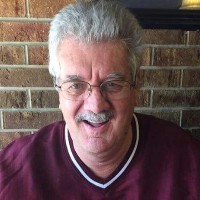 “My wife, Jeanne, and I are very grateful to the HealthWell Foundation for giving me my life back.

In 2003, I was prescribed medications to deal with some mental health issues I was struggling with at the time. The doctors warned me some of them were very powerful and it was like “playing with fire” because there could be serious side effects. I heard what they said, but I guess like a lot of people, I didn’t think it would happen to me.

For a few years, everything seemed just fine. Then my tongue started to stick out all on its own. It was like I was licking my lips, even when I wasn’t. It got a lot worse. I started chewing the inside of my cheek and my tongue uncontrollably until it was impossible to eat and, sometimes, even speak. I was in unbearable pain.

My doctor said I had Tardive Dyskinesia (TD), which causes uncontrolled facial and muscular movements. I’d never heard of it, but it was one of the possible side effects of the medications I had been taking.

For years my mouth wouldn’t close all the way. It was so bad I could hardly eat. It’s a big deal when you can’t chew. Every three months, we traveled to Wake Forest to get injections to deal with the pain. It cost about $450 every time we went, plus the gas, but it was the only option I had.

Then about three years ago, my doctor in Charleston found a drug that he thought might help my TD symptoms a lot. It was a great relief for me and for my family when it worked. Then we got the very bad news when my insurance company said this medication was too expensive and that they would only cover a different one. I gave it a try, but it didn’t work at all. This was a very dark time for me. I just couldn’t imagine having to live again with the nightmare of TD. But being a working man, I could not have paid for the medication on my own.

Fortunately, when I went on Medicare, I was able to get a prescription for the medication that I had needed to treat my TD. But, even then, the copay was more than we could afford. That’s when HealthWell was able to help. My doctor told me about the HealthWell Foundation and gave me the 800 number. It’s been over a year now since you started helping. I am functioning normally again and, after what my wife and I have been through, that’s a big deal.

As I said before, thank you for giving me my life back.”