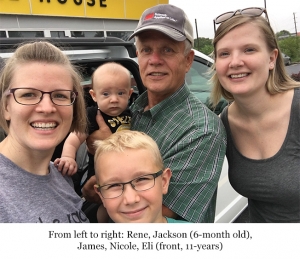 “My dad was diagnosed with Multiple Myeloma in early 2019, but kept it hidden from his family. No one knows why, but I have a few theories. He survived a fight with colon cancer back in 2008 and it nearly killed him. Maybe the doctors didn’t explain it well enough.

Maybe he thought if he forgot about it, it would just go away. Maybe he didn’t understand it and what it could do to his body. Maybe he was scared and didn’t understand the treatment options; he might have thought they would be like last time. I will never know. All throughout 2019, dad looked more worn down, but he would always say he was fine. He had fractured a couple ribs in 2019 and we all attributed it to his job (he was a mechanic who owned his own business for over 40 years).

In February 2020, my mom, sister, and myself were made aware of his diagnosis. My sister started going to doctor appointments with him and, in mid-March, we had convinced him to try the treatment. He was convinced because of the flexibility he had in choosing how aggressive it was, knowing that he might be able to withstand the financial burden because of a grant he received from the HealthWell Foundation and, because his family was there for him. On March 25, my dad broke his sternum and several ribs just by standing up. His bones became so brittle from the myeloma that we were now trying to play catch-up. On April 1, my dad was sent to a nursing home for physical therapy. This was during the time in which all nursing homes were on lockdown from COVID-19. No visitors in or out. There my dad stayed for 21 days deteriorating with no one there. My sister fought to have the medication delivered to her house so that he could start his treatment in the nursing home. That took 10 days. On April 10, he started his treatment for the myeloma. He finished one, two-week round of the treatment, which had a copay of $2,685.45. He was to go through six rounds but was only able to finish one. On April 21, my dad was released from the nursing home only to die at home nine days later, on April 30. Now, we all know what multiple myeloma is capable of. It slowly turns your bones to swiss cheese and, without treatment, you will start to fracture and break bones doing the simplest of things. This disease is also extremely painful and cruel. I wish someone told my dad these things back in 2019. Maybe he’d still be here.

The grant that my dad received could have saved his life. Because of this, my sister and I donated back to HealthWell in hopes that it saves someone else’s father. I miss him every day.”