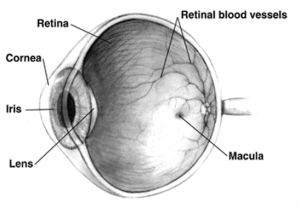 Macular Degeneration: A Gradual Loss of Vision
Macular degeneration progressively devastates eyesight, causing blurred vision and blocking the center of a person’s visual field. What begins as a minor annoyance ends up making everyday tasks such as reading and driving impossible.

Wet Age-Related Macular Degeneration (AMD)
In wet AMD, the infiltration of excess blood vessels is the main culprit. These abnormal vessels often leak fluid and blood, injuring the retina. Wet AMD progresses quickly, leading to loss of central vision without treatment. This form of the disease accounts for about 10 percent of cases.

Dry Age-Related Macular Degeneration (AMD)
Dry AMD involves a gradual breakdown in the macula’s light-sensitive cells. The dry variety progresses much more slowly than wet and accounts for about 90 percent of AMD cases. Advanced dry AMD occurs when cells in regions of the retina have wasted away and died. Sometimes these regions of atrophy (death) look like a map to the physician who is examining the retina, giving rise to the term “geographic atrophy” for late-stage dry AMD.