The first (and so far, only) chimeric antigen receptor T-cell (CAR-T) therapies—tisagenlecleucel and axicabtagene ciloleucel were approved in 2017, and they remain one of the hottest types of immunotherapies on the market today. They work by boosting the body’s ability to recognize and attack cancer cells. This column reviews the basics of CAR-T technology and takes a peek at CAR-T innovations moving through the pipeline.

Term of the Week: Killer T-Cells

CAR-T therapy is based on a type of white blood cell called a killer T-cell. The job of these cells is exactly what the name implies — to kill dangerous cells. They target diseased cells in the body via cell-surface receptors: each has a uniquely shaped receptor and recognizes its intended target because the shape of its receptor “matches” or fits into a uniquely shaped surface protein found only on diseased cells. Once the killer T-cell “docks” onto its target, it injects an enzyme which triggers death. The result: no more bad cells. 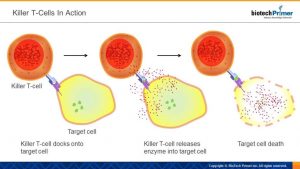 In theory, our immune system should recognize the unique proteins presented on cancerous cells. However, there are two main reasons this doesn’t always happen:

So what’s a scientist to do?  Figure out a way to train killer T-cells to ALWAYS recognize and destroy cancer cells…enter CAR-T.

How to Train an Immune System

CAR-T therapies boost the body’s ability to recognize and attack cancer cells. These “super” killer T-cells have been physically enhanced to go after cancer. Like the mythical chimera, this drug is composed of different parts. Genetic engineers fuse an antibody with a killer T-cell receptor to create a chimeric molecule—the “C” in CAR-T.

The transformation begins with technicians removing killer T-cells from a patient’s body and isolating them in the lab. Next, scientists use a viral vector—a virus that has been modified to contain a therapeutic gene—to deliver a gene that encodes the chimeric receptor to the T-cells.

The enhanced receptor includes two parts: a targeting domain and an activation domain. The first is the portion that remains on the surface of the T-cell. It’s an antibody that detects and locks onto a specific surface protein on the patient’s malignant cells. The activation domain part of the receptor is triggered once the targeting domain attaches itself to the desired cancer protein. 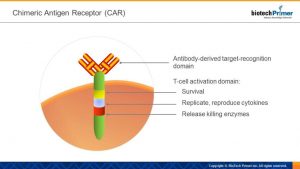 The engineered T-cells are then reinfused into the patient, at which point the targeting domain finds the proper surface protein on the tumor cell and attaches to it. Then, the activation domain signals the killer T-cell to: 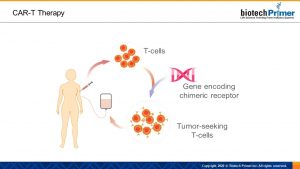 What’s in a Name?

The current generation of CAR-Ts have the potential to cause serious safety issues in some patients. While highly effective against blood cancers, their results have been less impressive when targeting solid tumors. Finally, existing CAR-T therapies are patient-specific, which adds to their expense and the time required for their production. Let’s take a look at each of these issues in turn and examine some steps that are being taken to address them.

Eye of the Storm

One of the reasons CAR-T treatments are so powerful is because once activated, they multiply inside of the body, and release inflammatory molecules called cytokines. Cytokines serve two core functions:

Cytokine signaling makes for a quick, strong, and usually appropriate immune response via a positive feedback loop in which activated white cells release more activating cytokines. The response typically dissipates when the pathogenic cells have been destroyed. However, sometimes the feedback loop just keeps looping. This phenomenon is called a cytokine storm, and leads to acute inflammation with high fever, swelling, and/or nausea. It sometimes causes serious tissue damage and even death. For example, excess fluids can seep into the lungs and cause them to fail. Although uncommon, cytokine storms pose the biggest risk of CAR-T treatments.

Tocilizumab has been approved for the treatment of cytokine storms in patients undergoing CAR-T treatments. The drug is a monoclonal antibody therapy designed to “mop up” excess interleukin 6, an inflammatory cytokine.

In one example of next generation therapy, patients take an adjunct small molecule drug during their CAR-T infusion. This sidekick medicine provides an on/off switch for the CAR-T therapy. It turns on the therapy to fight the cancer. Should a cytokine storm ensue, doctors can immediately withdraw the adjunct drug, turning off CAR-T and ultimately stopping cytokine release.

So far, CAR-T has proven most effective against blood cancers. Targeting solid tumors is more difficult, in large part because tumors contain cells that secrete anti-inflammatory cytokines, or cytokines that turn the immune response down. Solid tumors can also be difficult to penetrate, meaning CAR-Ts can’t always effectively access malignant cells on the tumor’s interior.

One way to combat this immunosuppressive environment is to engineer CAR-Ts to secrete specific inflammatory cytokines designed to beef up their ability to attack solid tumors. One turbo-charged CAR-T in development releases interleukin 12 when triggered. Interleukin 12 is a cytokine known to combat the tumor’s immunosuppressive environment. When combined with small molecule controls for safe activation of the CAR-T, this immune-activating protein should be released in a safe and controlled manner.

Another approach to targeting solid tumors with CAR technology is to use a different type of white blood cell that more easily penetrates solid tumors. Enter natural killer (NK) cells. These white blood cells are a part of our innate immunity, or the immune response that is activated immediately in response to any threat. Most immunologists think that NK cells play a role in recognizing and killing off cancer cells that arise in our body and are able to more easily penetrate solid tumors. However, early-stage cancers often aren’t recognized as a threat. By modifying NK cells with a CAR that targets them to a specific tumor type, their killing ability can be put to work. CAR-NK therapies are now in Phase I/II clinical studies for B-cell malignancies.

Chowing Down on Cancer

Macrophages are our body’s scavengers. The name derives from a Greek phrase meaning “big eater.” These cells kill infectious or diseased cells by surrounding and digesting them. Think of a sloppy Pacman. After a macrophage meal, minute bits of foreign cell proteins or antigens remain on its surface. The leftovers help activate some of the immune system’s other defenses, such as killer T-cells.

Biopharma companies are carrying out preclinical development of CAR-macrophages to destroy specific cancer cells. The amped up macrophages will simultaneously trigger other immune cells to recognize and attack those same antigen-bearing cells. Like other macrophages, CAR-macrophages can penetrate solid tumors much more effectively than basic T-cells.

First generation CAR-T has been patient-specific, or autologous. In other words, T-cells are first removed from the patient to be treated, modified, and infused back in. Customizing CAR-T in this manner is time consuming and expensive but necessary to avoid immune rejection.

A few different companies are exploring ways to create allogeneic or “off the shelf” T-cell therapies that can be used with any patient. The trick is to remove the telltale signs that allow the recipient’s immune system to recognize the engineered T-cell as foreign. Strategies in preclinical development use genome editing to remove the genes responsible for immune rejection.