Real World Health Care concludes its series on non-small cell lung cancer by speaking with Erica Carpenter, MBA, PhD, Research Assistant Professor in the Department of Medicine at the Perelman School of Medicine at the University of Pennsylvania. Dr. Carpenter also serves as Director of the Circulating Tumor Material Laboratory in the Division of Hematology/Oncology at the Abramson Cancer Center.

Dr. Carpenter served as senior author on a recent study that suggests for patients with advanced lung cancer, a non-invasive liquid biopsy may be a more effective and suitable alternative to the gold standard tissue biopsy to detect clinically relevant mutations and help guide the course of treatment.

Real World Health Care: Explain your role at the Perelman School of Medicine. 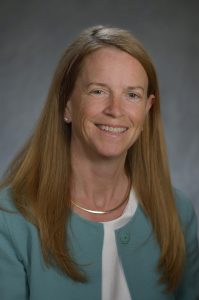 Erica Carpenter: I am Director of the Circulating Tumor Material Laboratory and an Assistant Professor in the Division of Hematology-Oncology at the Perelman School of Medicine. My lab focuses on the identification, capture, and analysis of Circulating Tumor Cells (CTCs) and cell-free DNA (cfDNA), exosomes and other material shed from cancer patient tumors.  Blood, bone marrow, pleural effusions, and other non-invasively captured patient samples are used to detect biomarkers which will allow: early detection of disease as well as post-therapy monitoring of minimal residual disease, an efficient means of determining clinical and biological response to therapy and, thus, clinical decision making, and cancer genetic phenotyping to drive personalized medicine that obviates the need for serial biopsies in a population of patients for whom these procedures can be difficult, risky, and insufficient.

RWHC: Can you give us an overview of your recent research as it relates to non-small cell lung cancer and liquid biopsies?

EC: While the work described in the Clinical Cancer Research paper is the only NSCLC liquid biopsy study we have completed, we have several studies currently enrolling, including studies on the use of liquid biopsies to monitor and predict response of patients receiving a form of immunotherapy known as checkpoint inhibitors, and characterization of the tumor cells and circulating tumor DNA found in the pleural effusions (excess fluid that sometimes builds up in patients’ lungs) of lung cancer patients as another method for monitoring without an invasive biopsy.

RWHC: Just a few months ago, the FDA approved the first liquid biopsy test for patients with metastatic NSCLC. Why is this an important development?

EC: This is important for a number of reasons. First, the cobas test detects mutations in a gene called EGFR that can be targeted with specific drugs that have been shown to be effective in NSCLC patients with these specific mutations. In addition, liquid biopsies in general can greatly improve sensitivity of mutation detection in metastatic patients. Metastatic disease means that a patient has tumors in multiple sites in the body, and this can make surgical biopsy or fine needle aspirate very difficult to perform without great discomfort to the patient. Metastases can sometimes occur in places like the bone or brain where it is impossible to invasively obtain tumor tissue. Moreover, the genetic profile of a tumor tends to evolve over the course of a patient’s therapy, and it is not unusual for a metastatic patient to exhibit mutational heterogeneity where not all mutations are expressed in all tumor locations. In these cases, it is thought that a liquid biopsy will detect all or most mutations as all tumor sites, whether primary or metastatic, are thought to shed DNA into the blood. Finally, when a next-generation sequencing panel, such as the one used in our study, is applied to a liquid biopsy, comprehensive and clinically actionable data can be obtained with a single blood test, including mutations in multiple genes associated with therapy resistance.

RWHC: Do you think that liquid biopsies will become a standard of care for NSCLC patients? Will they, or should they replace tissue biopsy? Why or why not?

EC: Liquid biopsies are already becoming a routine part of care for NSCLC and other cancer patients here at the Abramson Cancer Center at Penn Medicine. These tests can be incorporated into the blood draw procedure for other standard of care monitoring blood tests and performed at already scheduled outpatient visits, thus causing no additional pain or inconvenience to the patient. We are working to better understand the different ways in which liquid biopsies can be used to better manage the care of these patients. However, while I expect liquid biopsy use for NSCLC and other cancer patients to continue to expand, I do not expect that they will replace tissue biopsy. Next-generation sequencing of circulating tumor DNA cannot provide crucial phenotypic information, such as information about the physical characteristics of the tumor, that are essential for initial diagnosis. Tissue biopsies can also play a unique role in monitoring of patients for the development of neuroendocrine disease, which can be associated with therapy resistance but is not detectable using ctDNA.

RWHC: What challenges need to be overcome to make them a standard of care?

EC: More studies need to be done, and this is an area of active focus for us, to measure whether the use of liquid biopsies has a positive effect on patient outcomes. In addition, clinical ctDNA tests tend to be ordered for detection of mutations that can be therapeutically targeted, or the emergence of mutations that signal the development of therapy resistance. To become a larger part of the standard of care for NSCLC and other cancer patients, we must better understand whether liquid biopsies can be used to effectively monitor patients receiving other important forms of therapy, including recently approved types of immunotherapy.

RWHC: Beyond detecting the gene mutation responsible for NSCLC, how can liquid biopsies be used to monitor the progression of the disease?

EC: As I mentioned earlier, circulating tumor DNA tests for NSCLC patients are typically used to detect driver mutations and/or mutations that indicate the development of therapy resistance, some of which can also be therapeutically targeted. However, sometimes the physical characteristics of the tumor, including the number of circulating tumor cells in blood and expression of certain protein markers, can be measured by liquid biopsy and used to monitor disease progression. For instance, an increase or decrease in the number of circulating tumor cells (CTCs) detected in a tube of blood can be an indication of disease progression or response to therapy, respectively. Moreover, these CTCs can be isolated and gene expression measured to detect signatures associated with sensitivity or resistance to certain forms of chemotherapy in other cancers. CTCs can also be used to non-invasively assess expression of a protein known as PDL-1 which has been shown to be associated with a response to a form of immune therapy known as checkpoint inhibitors.

RWHC: How can NSCLC liquid biopsy tests be used to help increase the length of NSCLC patient survival?

EC: This is an area of active study for us. We will seek to measure whether repeat, non-invasive liquid biopsies can be used to detect therapeutic targets when a tissue biopsy isn’t possible, thus possibly enhancing the chance of a clinical response to therapy. Others have shown that a liquid biopsy can detect therapy resistance weeks or even months before standard of care imaging. It will be important to determine whether such early detection, especially when used to guide re-stratification of the patient onto a different therapy, has a positive effect on outcomes. Additionally, one of the most significant predictors of prognosis in NSCLC is the stage of disease at presentation, and our lab is actively focused on determining whether liquid biopsies can be utilized to identify patients with early stage disease.