Hepatitis C: Fighting the Stigma as Well as the Disease

Warren Hall has grown accustomed to the fear and trepidation in the voices of people who have been diagnosed with hepatitis C. As National Manager of Support Services for the American Liver Foundation (ALF), Hall regularly speaks with callers to the ALF helpline and participates in live chat sessions to educate people about the viral disease and answer their questions. 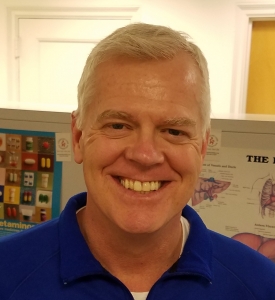 “Sometimes, people are looking for a basic understanding of hepatitis C and how it affects the liver,” Hall said. “They may not be exactly sure what hepatitis C is – they just know it’s something they don’t want. It’s important to educate them that if left untreated, hepatitis C can cause significant liver damage.”

In many cases, Hall and his team at ALF address issues beyond the medical and physiological ones. He said hepatitis C, along with other liver diseases, carries a stigma that can lead to a range of emotions, from denial to embarrassment and even hopelessness.

“Liver diseases in general are often associated with what some consider poor lifestyle choices, like excessive use of alcohol,” he said. “In the case of hepatitis C, the most common associations are injectable drug use or unsafe sexual practices.”

Hall likened the hepatitis C stigma to the negative stigma attached to HIV and AIDS in that virus’s early years. He pointed to 1980s and 90s advertisements for HIV testing that were alarmist and accusatory – casting dispersions on the gay community – and contrasted them with today’s advertisements for HIV treatments showing happy, smiling people going about their daily lives, confident in their ability to treat their disease.

“What Will People Say?”

Hall is quick to point out that, just as a teetotaler can contract a liver disease (for example, nonalcoholic steatohepatitis or NASH), so too can someone contract hepatitis C without ever having used IV drugs or practiced unsafe sex. In fact, most baby boomers – who represent 75 percent of hepatitis C cases in the U.S. – contracted the disease from a blood transfusion conducted before hepatitis C was discovered in 1989.

Younger people, however, are also at risk. Recently, troubling increases in the rate of new hepatitis C infections related to injection drug use have occurred among young people in some parts of the country, according to the Centers for Disease Control and Prevention (CDC).

Hall said that, while baby boomers tend to question how they got hepatitis C, many younger people who reach out to ALF’s Support Services don’t. Instead, they express fear over friends and family finding out.

“Their fear isn’t necessarily connected to the health aspects of the disease,” Hall said. “It’s connected to the stigma of the disease. They worry about what people will say or what will happen when their parents, spouse or friends find out. They also worry that it’s something they’ll have to live with for the rest of their lives.”

The best way to counteract the perceived stigma, Hall said, is speaking matter-of-factly about hepatitis C and creating an action plan for starting and completing treatment – regardless of the way someone contracted the disease. This approach is particularly effective for people who have been diagnosed recently and aren’t experiencing any symptoms.

“We are positive and encouraging, never harsh or accusatory,” he said. “We are cure-focused, not cause-focused and let them know that not only can hepatitis C be treated, it can also be cured within a matter of months. They can take care of it and nobody needs to know. That usually provides a sense of relief and gives them peace of mind moving forward.”

While there is currently no vaccine to prevent hepatitis C infection, highly effective treatment options are available. However, because hepatitis C initially has few noticeable symptoms, at least half of those infected don’t know it. That’s why the CDC says it’s critical for everyone at risk for hepatitis C to get screened, including:

Hall said that while the stigma associated with hepatitis C can keep people from seeking treatment, the cost associated with treating the disease can also be a deterrent. He brings up the issue of treatment costs in virtually every patient interaction and shares financial assistance resources.

“We don’t want people to get excited about the cure, only to be shocked and put off by the cost,” Hall said. “We make them aware of various assistance options.”

One such option is provided by the sponsor of Real World Health Care, the HealthWell Foundation. HealthWell’s Hepatitis C Fund provides up to $30,000 in financial assistance to qualifying individuals to help pay for insurance premiums or medication copayments for the treatment and management of hepatitis C.

“The financial aspect of treating hepatitis C should never get in the way of getting cured,” concluded Hall. “Your health is too important.”