Helping Others Get the Help They Need

Editor’s Note: We conclude our series on Multiple Myeloma with a profile of a patient who was struggling to afford her treatments until she received a grant from our sponsor, the HealthWell Foundation.

The searing back pain was the first indication to Marilyn Gould that something wasn’t quite right. The 67-year-old retired architect from Baltimore started to feel the pain at age 62 and began visiting a variety of doctors and specialists to find out what was wrong. 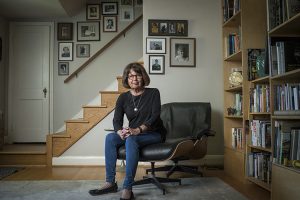 Blood work indicated high protein levels — a potential marker for multiple myeloma.  Imaging did not reveal any tumors.  Eventually, her L5 vertebra cracked and she had to have surgery.  It was during this surgery that a tumor was discovered inside her vertebra.  Two surgeries were needed to remove the tumor and replaced it with a titanium cage.

“At that point, there was no question: I had multiple myeloma,” said Marilyn.

“Getting the formal diagnosis was almost like a relief, because I knew I was a candidate for the disease and tried to educate myself about what was going to happen,” she said. “But nobody told me exactly what to do.”

Marilyn’s hematologist suggested that she consult with a multiple myeloma specialist, who started her on a course of treatment that involves an oral chemotherapy medication, steroids, an antibiotic and four 30-minute bone infusions a year — a regimen she has followed for the last 5 years.

As can happen with many chronic and life-altering diseases, multiple myeloma and its related treatments have had an impact on Marilyn’s lifestyle, though she says she still remains fairly active.

“I don’t run anymore and can no longer play golf,” she said. “But I do a lot of walking, and some bike riding. I also practice yoga, which has helped tremendously with my stability and balance, which have been compromised after two back surgeries.”

The disease and its treatments have also had an impact on Marilyn’s financial security.

“My Medicare Part D coverage still leaves me with a significant copay for the oral chemotherapy drug that I need to take for three weeks every month,” she said. “It’s a $10,000 copay every year — a difficult amount to afford on a fixed income, or just about any income. I originally received financial assistance from another copay assistance foundation, but when they couldn’t renew my grant, I turned to the HealthWell Foundation.”

Marilyn said that financial assistance for treatment copays is a common topic when she speaks with other multiple myeloma patients as part of her volunteer outreach work with the Leukemia & Lymphoma Society.

“Just about everyone I speak with has financial concerns,” she said. “I let them know about the existence of copay assistance foundations like HealthWell, as well as other help that is available, like the Maryland-based MobilityLink program, which provides transportation to and from treatments for people who can’t drive or don’t have access to other transportation.”

While Marilyn is quick to point out that she is not a medical professional and can’t give medical advice, she does have words of wisdom to share with other multiple myeloma patients.

“Don’t be afraid to seek a second opinion, especially if a bone marrow transplant has been suggested,” she said. “And because multiple myeloma tends to hit people over 50 more than younger people, I tell everyone of that age to stay current with their blood work.”

The HealthWell Foundation, sponsor of Real World Health Care, is proud to have supported the multiple myeloma patient community in recent years with copayment and premium assistance. We have helped more than 9,000 multiple myeloma patients afford their treatments since 2015 — thanks to the generous support of our donors. Due to high patient volume, our multiple myeloma fund is temporarily closed until we receive additional funding. We invite corporations and individuals to help us meet this demand by contributing to our Multiple Myeloma Medicare Access Fund, so no one goes without essential medications because they cannot afford them.