Don’t Judge a Book By Its Cover

Editor’s Note: February is American Heart Month, sponsored by the American Heart Association. While some may think heart problems are primarily a concern of the middle-aged and older, one out of every 100 kids has a heart condition. Simon’s Fund was established in 2005 in memory of Simon, son of Phyllis and Darren Sudman. The organization provides free heart screenings to children in the Greater Philadelphia area. It also sponsors medical research projects, hosts awareness events, works with major medical institutions and promotes legislation. We’ve invited Simon’s dad to share his thoughts in this week’s blog post.

Last year, many parents in the Greater Philadelphia area learned what I learned ten years ago – sudden cardiac arrest (SCA) isn’t just an adult thing. It takes the lives of thousands of children every year. 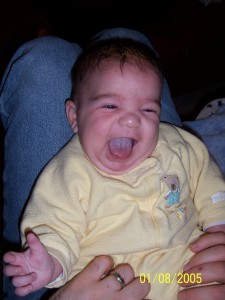 Two students, an eighth grader from Mount Laurel, N.J., and a first grader from Philadelphia, collapsed and died from cardiac arrest.

In 2005, my son, Simon died suddenly. He was a baby so most people told me it was SIDS. Our pediatrician, however, was a bit wiser. She said, “Get your hearts checked because babies don’t just die.” Following her advice, we got tested. My wife, Phyllis, was diagnosed with a heart condition called Long QT Syndrome. It’s an arrhythmia that is linked to 15 percent of all SIDS deaths.

My heart breaks for these two families. The obvious reason is that there is a gaping void in their life now. It may narrow over time, but it will always be there. There is nothing more painful or unjust than losing a child. We all know that life is unfair, but it’s not supposed to be this unfair.

The less obvious reason is that I’ve dedicated the last decade to raising awareness about sudden cardiac arrest in children so that other parents wouldn’t have to take this path. I wanted them to be smarter so they could do a better job of protecting their children. Apparently, I failed. I let these families down.

Now, they’re walking in my shoes wondering how, in the 21st century, their child can die from a detectable and treatable heart condition. Think about that. It’s not a rare disease. We don’t need billions of dollars to find a cure. We have the technology. We have the treatments. We just need to look. We need to be a little curious, like my pediatrician was 10 years ago.

A note from our sponsor:  Are you, or is someone you love, an MS patient on Medicare in need of financial assistance? Click here to visit The HealthWell Foundation’s eligibility page.

The Journal of American Board of Family Medicine published a study in 2012 showing that 72 percent of all students that died from SCA reported having symptoms from the underlying heart conditions. I’ve met students who reported symptoms like a racing heart or fainting. They were later diagnosed with heart conditions. Prior to their diagnosis, their symptoms were dismissed as drinking too much soda and being dehydrated, respectively. The signs were there. We almost let those kids down. We need to be a little more curious…a little wiser.

SCA happens when the heart stops beating, suddenly and unexpectedly. It is not a heart attack. That’s what happens when blood can’t get to the heart. The conditions that cause SCA in children come in two varieties: structural and electrical.

Here are the warning signs: 1) fainting or seizures during or immediately after exercise, 2) unexplained shortness of breath, 3) dizziness during exercise, 4) extreme fatigue, and 5) a racing heart. Also, parents should be aware if a family member has died suddenly and unexpectedly before the age of 50.

So what’s next? The experts will debate the merits of making heart screenings a standard of care, while we continue to provide free eye and ear exams to students in schools. The lawmakers will debate the merits of placing AED devices in schools, even though each is already equipped with life-saving measures like fire alarms, sprinkler systems and security systems. However, starting tomorrow, we, the parents, can be more diligent and less dismissive about the warning signs of the underlying conditions.

My seemingly healthy baby, who was average height and weight and scored an 8 and 9 on his Apgar tests (used to quickly and summarily assess the health of newborn children immediately after birth), had an undetected heart condition. These two boys, energetic and vibrant students, described as “one of the kids everybody knew,” and “shy, funny and loveable,” had undetected heart conditions. The answers may be right in front of us. We just need to look.

As children, we learn not to judge a book by its cover. Remember, we need to look at what’s on the inside. It’s time to realize this saying applies to our children’s hearts too.

Do you agree that heart screenings should be standard for children? Let us know your thoughts in the comments section.