Real World Health Care: According to your literature, more than 5 million Americans suffer from Alzheimer’s disease. What do the majority of these patients most need in terms of treatments: treatments to address the symptoms of the disease, or treatments to stop or slow the progression of the disease? Why? 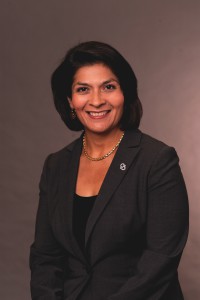 Maria Carillo: What people need most is hope – hope that comes from significant progress in Alzheimer’s research that they can understand and that benefits their day to day life. Thanks to the amazing work of thousands of Alzheimer’s Association advocates, and many dedicated legislators, we have in place a U.S. National Plan to Address Alzheimer’s Disease. The Plan calls for real progress in treating and preventing Alzheimer’s disease by 2025. An expert workgroup convened by the Alzheimer’s Association recommended a federal investment of $2 billion per year for 10 years to make this achievement a real possibility. We are making strides toward that level of commitment – we’re over half way there – but we still have a way to go.

To more directly answer your question, both symptomatic and preventive therapies have a lot of value. People with Alzheimer’s, and those at high risk of getting it in the near-term, need something to help them now. Greatly reducing or eliminating dementia symptoms and/or pushing back the onset of dementia by ten, or even five, years, will act as something like prevention for the great majority of people – they will live most if not all of their lives free from debilitating symptoms.

Finally, we all look forward to the development of proven ways to reduce risk and prevent Alzheimer’s disease and other dementias – for the millions of lives saved, the billions of dollars saved, and the enormous suffering eliminated.

RWHC: What are some of the most promising areas of treatment research that the Alzheimer’s Association is funding?

MC: The Alzheimer’s Association is the largest private, nonprofit funder of Alzheimer’s research, awarding more than $350 million to more than 2,300 projects. Our goals are to (1) advance our understanding of Alzheimer’s, (2) help identify new treatments, (3) improve care, and (4) further our knowledge of brain health and Alzheimer’s prevention.

The Alzheimer’s Association has provided essential startup funding to, and/or funding to expand the scope of, three major Alzheimer’s disease prevention trials currently underway – the A4 Trial, DIAN TU, and API APOE4.

The Alzheimer’s Association grants program has funded – and continues to fund – some of the most important research threads in Alzheimer’s science. These topics and ideas move the field forward by contributing to knowledge about Alzheimer’s, refining research questions, and yielding clues to causes and treatments. Examples include:

MC: The two biggest issues/obstacles are insufficient funding for Alzheimer’s research and the need for more participants for clinical studies.

The Alzheimer’s Association and its nationwide constituency is the leading advocate for increased research funding at the federal level, and also the leading nonprofit funder of Alzheimer’s research. That said, many more voices need to be heard – every day and through every vehicle – to ensure that the federal government understands exactly how high a priority this issue is, and allocates the needed funds.

Recruiting and retaining clinical trial participants is now the greatest obstacle, other than funding, to developing new and better treatments for Alzheimer’s disease. Before any drug or therapy can be used in medical practice, it must be rigorously tested to certify that it is safe and effective.

Alzheimer’s Association TrialMatch provides users with comprehensive clinical trial information and a customized list of studies they may seek to enroll in. TrialMatch is open to everyone, including people with Alzheimer’s or other dementias, their caregivers, family members, and anyone who wants to get involved in the fight against Alzheimer’s.

There are several other registries also working to identify and marshal individuals for Alzheimer’s disease research. The primary need is for increased awareness that these services exist, and that participating in Alzheimer’s research is one of the greatest gifts that one can give to current and future generations.

RWHC: Is a preventative or curative treatment on the horizon? Do you think this is a disease that can ultimately be prevented before it starts or cured after it starts?

MC: Similar to the way we address heart disease, the preferred strategy for Alzheimer’s would include:

The Alzheimer’s Association believes that all these things are possible in the relative near-term with the appropriate investment in research.

We have made great strides in treating and preventing many diseases – even major killers such as cancer, heart disease, and HIV/AIDS – when we have made the issue a high priority and made the resources available for research. Now is the time to do the same for Alzheimer’s disease.

RWHC: What sort of initiatives or activities can we expect to see from the Alzheimer’s Association over the next few years?

At the same time, the Association is deeply involved in clinical trials aiming to prevent Alzheimer’s disease. In addition to the funding initiatives mentioned earlier, we collaborate with Fidelity Biosciences Research Initiative (FBRI) and the principal investigators of all the major prevention studies in the Collaboration for Alzheimer’s Prevention (CAP) seeking to facilitate the sharing of information, resources and expertise that may speed the discovery of new preventive treatments. CAP was first convened in 2011 to help researchers learn from and support each other’s work; share data; harmonize data gathering and trial outcomes to allow for comparability across studies; and hold open, informal dialogue with regulators.

Inflammation is a factor that contributes to the cause and progression of many diseases and conditions. This is emerging as a significant area now in Alzheimer’s research. The Alzheimer’s Association’s Part the Cloud initiative, for example, is making the development of new therapies in this area a target of multi-million dollars in research funding.

The Alzheimer’s Association also continues to prioritize issues such as the impact of sex/gender, race/ethnicity, education, and socioeconomic status on the development and progression of Alzheimer’s and other dementias.