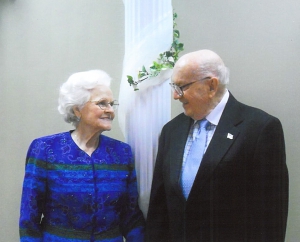 The past two years have been pretty bad for my husband and me. On February 21, 2011 we lost our only daughter to Scleroderma – a devastating disease that shrunk her skin, took her bones, her kidneys, her heart and finally her life – even though she had the best medical care available in Atlanta, GA.

We didn’t think things could ever be that bad again but, in July of that year, I was diagnosed with non-Hodgkin’s lymphoma – Type B. In August, our son (and only remaining child) was diagnosed with Stage IV prostate cancer. We feared that we would lose both our children in the same year; however, he was treated very aggressively with radiation and hormones and now is in remission.

My husband turned 90 this year and has bladder cancer, prostate cancer, he just had a melanoma removed from his face and two weeks later a squamous cell carcinoma was removed from his arm. The tests showed complete removal (how thankful we are for that). So far, we have been able to keep up with the copays for everything until non-Hodgkin’s lymphoma struck me. Without your generous support the winter of 2011 and June of 2012, I could not even have begun my treatment. But the Lord is good! He led me to a great medical team who led me to you kind folks and my treatment began in October 2011. I am now scheduled for four treatments, beginning in May and another four beginning in November, after which my doctor thinks I won’t need any more for a while.

Could you possibly help me with the series of treatments? I just have to get well. My husband is 90 years old and besides the cancer in various parts of his body, he is losing his eye sight, his memory (it is bad) and his hearing. There is no one else to take care of him. I am the last living of my family and he has one sister who is in worse health than he is. Please! Let me know if you can help me in any amount. I will be eternally grateful. Please forgive the length of this letter. When I began writing, it just all poured out. I have no one to talk to about this, so thanks for listening.

P.S. Please accept my meager check in the amount of $25.00. I hope there will be more available in time.