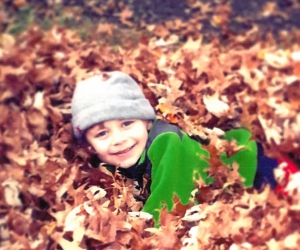 My name is Ashley, and I am Finn’s mother. In January of 2011, on Finn’s first birthday, we ended up taking him to the emergency room because he was extremely ill and seemed to be struggling to breathe. It turned out to be a respiratory infection, but I suspected there was something else going on as well, as other children I knew had the same thing, but not as hard of a time as Finn was having.

Between February and May of 2011, Finn was hospitalized twice for three days, for breathing related illness. After the second time, we met with a pediatric pulmonary specialist, who determined that Finn likely had asthma, in a very severe form. For now, because he was so young, they could only classify it as Reactive Airway Disease, meaning that every time he had any sort of infection – be it a cold, ear infection, etc. – his airways and lungs would react by basically starting to close off. I was terrified.

The doctor reassured me that it was manageable with some preventive and rescue medication. I was relieved with that information, only to find out that my insurance no longer covered prescriptions until the deductible was met, in my family’s case – a deductible of $5,000. The two prescriptions Finn would need every month would cost us approximately $260. I was devastated, not knowing how we could afford it.

I called my aunt, who took care of both my grandparents before they passed away and who has a fantastic knowledge of insurance, health care, etc. She advised me to call the manufacturer of Finn’s medication, ask for coupons or something to help reduce the cost. I immediately did just that. They advised they did not have anything in place as far as coupons go, but to contact the HealthWell Foundation. They gave us the phone number, and again, I was on the phone immediately.

I spoke with a caring representative, who took time to hear our whole story, me crying on the other end, seemingly grasping at straws for something to help my son. A short time later, the words I was praying to hear came across the line, “You are approved for a grant through the HealthWell Foundation. You will not have to worry about paying for your son’s medication for a whole year.” I was crying and could not finish the conversation, handing the phone off to my husband to work out the details.

I felt as though this was surreal, couldn’t be real, we couldn’t be this lucky. But it was true, a short while later our card arrived in the mail, and all of Finn’s medication was taken care of every month. I have since changed jobs and now only pay a small copay for Finn’s medication. I continue to donate to HealthWell because if I can help HealthWell take away the worry from one family as they did for us, it is all worth it. Thank you HealthWell Foundation. Forever grateful!