Patient of the Month: The Most Beautiful Sunrise – One Grandmother’s Story of Survival 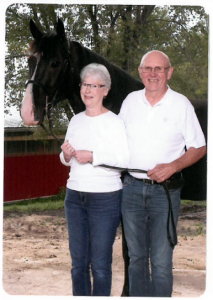 Lois and her husband

Working 10 hour shifts as a registered nurse in North Liberty, Iowa, Lois Ludvigson did not think much about feeling tired. All of that changed one December morning in 1998, which Lois remembers had – as she put it – the most beautiful sunrise.

The rest of the day was different, however. She had just had her yearly physical, and the results of her bloodwork had come in. When Lois’ doctor put her arm around her and led her into a room, empty except for her husband, she knew this was not about a hospital patient. Lois remembers how it felt hearing her doctor explain to her the different treatment options.

“You’ve just got to go with the shock,” Lois remembers, “It’s so unreal.”

Lois’ doctors – her coworkers and friends – had already planned her appointments out for her, starting with her bone biopsy. On New Year’s Eve, it was confirmed: she had chronic myeloid leukemia.

Lois decided that an interferon treatment would be the best option for her. This type of treatment, which according to Lois is rarely used today, involves the injection of a family of substances used by the immune system to fight diseases. The injections – which Lois gave herself – were affective at slowing the growth and division of leukemia cells, but had significant side-effects for her. After building up a tolerance to the drug, she started displaying flu- and lupus-like symptoms. After having a seizure, her doctor directed her to stop using the drug immediately. At her doctor’s behest, Lois sought out various clinical trials in hopes of finding a new treatment for her condition. Upon calling Stanford University, researchers said they wanted to see her in-person.

Having flown to California for testing, Lois was put on the experimental drug the next day. She continued to send Stanford blood every month and visit Stanford every three months. After the drug got approval and went on the market, took part in a further study there to help with their research in any way she could, which included sending blood to them every three months.

Now that the drug was on the market, though, Lois knew she would have to start paying for it herself. Her insurance covered the interferon treatments, but the new drug was very expensive. So expensive, in fact, that Lois told her husband she simply could not be treated. This was not an option, he replied, and after finding out about the HealthWell Foundation, Lois received a grant that covered the cost of the drug she needed to survive.

“I felt humble, and I still do. I think about the grant and what we would have done without it,” Lois said. “My heart goes out to people who don’t know about it, who are struggling, and I just feel humble.”

Since starting the treatment in September of 2000, Lois’ numbers have been stable. Though her condition still affects her, Lois says she’s come to terms with it.

“You have your little nuisances, not feeling well, feeling fatigue. But, you learn to live with them,” she said. “You learn to ask, ‘Is this worth feeling tired afterwards?’ and if I say yes, I’ll do it. That’s my choice, and I might have to rest the next week after. You learn to live your life differently, but it’s still a full life.”

Nowadays, aside from taking care of her health, Lois sews quilts with a group from her church, all of which are donated to children in hospitals.

“I feel so blessed that I can give back in this way,” Lois said. “Aside from enjoying my children, my grandchildren, my family, that’s my purpose.”

Has leukemia affected your life? How so? Let us know in the comment section.