How to Manage an Outbreak: The Ebola Story

Last week, Dr. Thomas Frieden, Director of the U.S. Centers for Disease Control and Prevention (CDC), gave an update explaining how the current Ebola epidemic is being managed, avoiding an even more disastrous outbreak and avoiding many deaths worldwide.  Dr. Frieden spoke at a joint conference held by the Kaiser Family Foundation (KFF) and the Center for Strategic and International Studies (CSIS). 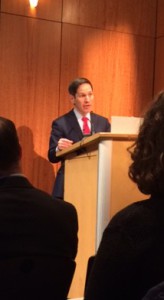 The fatality rate for influenza, by comparison is 1%, although far more people die from influenza because it’s more common.

There’s no preventative vaccine, treatment, or cure for Ebola.

The current outbreak, according to the Kaiser Family Foundation, stands at 23,132, with 42% of patients in Sierra Leone, 35% in Liberia, and 12% in Guinea.  All prior outbreaks of Ebola combined totaled about 10% of the current number of infected people.

The United States is by far the largest donor nation to the effort, having donated more than $2.4 billion, and the CDC plays a leading role, complete with boots on the ground, developing “best practices” to contain the virus.

The presentation revealed new U.S. public opinion data from KFF indicating that in 2014, Ebola was the most closely followed story, more than Ferguson, more than the missing Malaysian Air flight, and more than ISIS and terrorism.  The poll also indicated that as of December 2014, four in 10 believe Ebola is now under control.  In October 2014, that number was just one in 10.  In many ways, the public opinion is correct. New cases are dropping rapidly, though we are not yet out of the woods.  So what interventions by CDC and others helped make this turnaround happen?

“This is the most intensive response globally in CDC history,” said Dr. Frieden.  “We knew that for every one month of delay, the size of the epidemic would triple.  If we reached a tipping point where the majority [of Ebola patients] were safely identified and buried it would break.”

First, the CDC helped to diagnose the disease earlier in its staging by educating more health care workers on what symptoms to look for.  By knowing who is or may be infected sooner, the sick can be removed from locations where they might infect others.  The CDC’s efforts extend through providing, maintaining, and driving a fleet of 4 wheel drive vehicles throughout the effected regions to reach remote populations before the virus does and educating the population and health care workers about safety precautions. The CDC has worked quickly to change the culture around burials without compromising rituals and customs, by dressing the deceased in the clothes desired by the family while fully protected and behind glass so that the families can watch and approve.

How was the CDC able to move so quickly?  “There is no pro-Ebola lobby,” quipped Dr. Frieden.  “And this is a national security issue, which had strong support on both sides of the aisle. Health and health protection is an area where there’s common ground.  Public health systems remain a ‘best buy.’ It can have a major payoff not just in terms of lives saved, but social and economic stability too.”

“We’ve made tremendous progress,” said Dr. Frieden.  “The difference is night to day. Centers that used to be full of Ebola patients no longer are.  But there still are some centers where there used to be no cases but there now are.  We’re moving from a ‘build and bury’ stage – building treatment centers and burying the dead, to treatment phase.”

What’s next?  According to Dr. Frieden, an early detection diagnostic will be available soon.  That’s a good way to see that future outbreaks will be managed more expeditiously, resulting in fewer transmissions.

What do you think of the CDC’s ability to help contain Ebola?  While the U.S. is the largest donor, many nations donated as well.  Do you think we should lead the world in funding the effort to manage the Ebola outbreak?